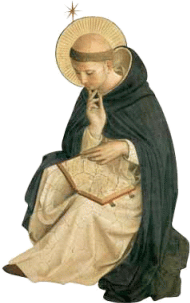 On December 22nd 1216 Pope Honorius II issued a document approving of the foundation of the Order, now known as the Dominicans. A month later on January 21st, 1217 Pope Honorius issued a second document, which set, out clearly the character of the Order.  The Pope explicitly stated the Order is founded for preaching and he addressed Dominic and his followers as “friars preachers”.  Up to that time the primary responsibility of preaching the Word of God was the bishops’. Honorius did something absolutely revolutionary in approving an order of preachers.

But who was Dominic and how did he come to found an Order?  He was born in a little village, Caleruega, in the North of Spain in the early 1170s.  He received his early education from an uncle of his, a priest. He then went on to study at the University of Palencia. While he was there a severe famine broke out and people were dying of hunger. Dominic manifested his wonderful compassion by selling his books to provide for the poor.

After ordination he became a canon in the cathedral of Osma. In 1203 he accompanied his bishop on a diplomatic mission to Northern Europe that took them through the South of France. On this journey Dominic became aware of two enormous challenges facing the Church: the people of Northern Europe who were not yet evangelised and the heresy in the South of France, which was leading the people from the truth of the faith. So Dominic became fired with missionary zeal for those who do not know the light of the Gospel and the work of re-evangelisation of Christian communities. He devoted the rest of his life to the mission of preaching the Good News.

At that time the region was in the grip of a heresy called Catharism. TheAlbigensians, (the name by which they were known) sharply distinguished the spiritual world, which was good, from the material world, which was evil and corrupt. They considered marriage to be evil, denied the Incarnation of Christ, the sacraments and the resurrection of the body. But they lived an austere life. While staying at an inn, Dominic was horrified to discover that the innkeeper was an Albigensian. Dominic spent the night in discussion with the innkeeper and convinced him to renounce his heretical views. From this experience Dominic conceived the model for anew order based on the style of life of the early apostles.  They were to travel on foot and without money, giving witness to the gospel ideals. Poverty was to allow them mobility and freedom.

They were to be specially trained in theology and doctrine. This was the beginnings of a new era in religious life. Dominic identified with the missionary apostles. The Order was to be at the service of the Church.

Dominic was a man of prayer.  He always spoke with God or about God. Preaching must flow from the contemplation of the Word of God and he always carried with him a copy of the Gospel of St. Matthew and the letters of St. Paul.
Dominic’s legacy was not in his personal holiness but in the apostolic way of life he initiated and inspired.